I know now this post is a little overdue, but I wanted to recap what was just an amazing month in my running journey.

Looking back to this past Summer, as preparations really began gearing up for Fall racing season, I have to admit the daunting nature of running in the heat.  I ran 71 miles in June, 108 miles in July, 122 miles in August, and capped it off with 131 miles in September.   All of those hot and humid days, I never thought I would be able to put in all of those miles without losing speed.  I won!  I beat the heat, I stuck to my training plan.  I had a very successful month of September which included two races. 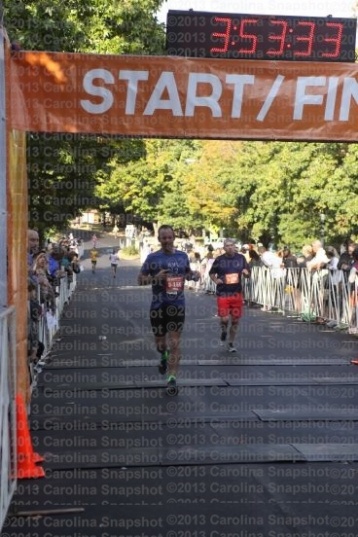 Both great races, and run on back to back weekends at the end of the month.  The photo above shows me coming into the finish of the marathon.  The clock shows a different time, as the corrals were stagger started, I began in Corral D, which began approximately 8 minutes after the initial gun.

Running last weekend in the mountains was such a nice treat.  The weather was damn near perfect.  So much so, that now back home, we are having a bit of a heat wave for this time of year, and because of last weekends cool temperatures, feels so much warmer than it really is.  Truth is, it should be starting to cool down, and October is usually a great month for running.

Tomorrow I race the RunRaleigh Half Marathon.  I don’t have any high expectations for the race.  I realize I am coming right off a marathon last weekend, so I plan on taking it easy.  I will not be shooting for any records.  I just plan on enjoying myself, and the experience overall.  It will probably feel pretty easy compared to last weekend.  This course has one fairly decent sized hill toward mile 12, but otherwise is pretty flat.

Racing during this season is fun.  Leaves changing, the crunching of them underfoot during a run always means that Fall is here.  I have three Half Marathons this month.  10/6, 10/20, and 10/27.  I plan on consistent training overall during the month in preparation for these races, but also keeping my legs in tune for City of Oaks and Rock n Roll Las Vegas next month.

So far so good.  Are you racing this Fall?  What do you enjoy most about running at this time of year?