April 9th I participated in the inaugural 5k for Rock ‘n’ Roll’s visit to Raleigh.  A great way to reach out to more runners is to include an additional distance, and boy did it work!  Running two events during the weekend also awarded each runner with an additional medal.  The Remix medal.  Since I was running the marathon on Sunday, I went into this race really as just a final tune up run.  I wasn’t giving it my all, in other words.  It was a fun event.

Since becoming a distance runner, I haven’t competed in many 5k’s in the past few years.  In fact, this would be my first 5k in almost two years.  I was seeded in corral 1, on the beautiful Dorthea Dix campus.  A rolling course taking us through paths, trails and roads around campus.  I can honestly say that it felt like it ended about two minutes after it started.  Much fanfare set us off on the course on a beautifully cool morning full of sunshine.  I felt pretty loose from the get go, and went out at a decent pace, but nothing too strenuous.  Since they were releasing corrals every minute, it was never congested at all.  I was running freely, but not overdoing it.  It actually felt a bit slow, but knowing I was running under an 8 minute mile pace, I was good with that.  Quite honestly, it felt a little weird to be holding back some, as this is not how I usually race.  Especially short distances.  I didn’t want to risk hurting myself or over exerting the day before a marathon, so I just went with the flow.

Up the hills, down the hills… soon enough the finish line came into view.  I clocked a 24:01.  I was good with that all things considered.  Not nearly my best on a 5k course, which is 20:44, but good on the day.  I walked away feeling good and warmed up for the marathon the following day.  I was actually quite surprised later that evening when the results were posted. 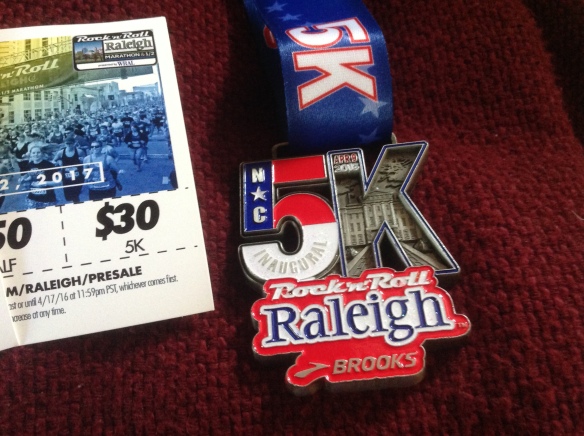