It was an early morning.  My 17 year old son and I had to be in Raleigh for our first time running the Race for the Cure 5k.  We’ve had a few days of torrential rains from Tropical Storm Andrea, so I was pleasantly surprised when I got up this morning at 4am, that the rain had finally ceased.  We left the house at 5:20, and found parking right at the start finish area thanks to a tip from a friend who has been at this race many times.  Since this race is so large, they make the masses park at the PNC Arena several miles away, and be shuttled in.  We were so lucky to have been able to park so close.

We were running as part of Team RunRaleigh Racing, and about 15 of us all gathered at 6:30 for a few group photos.  After that we filed into the starting area, very close to the front.  I have heard that because this race is so large, the start can be a challenge.  We wanted to be near the front so that we didn’t have to worry about tripping over other people.  As the starting bell rang, we were off.  The first mile or so heads down Hillsborough St. away from Meredith College before it breaks to the left and becomes a rolling course through old Raleigh neighborhoods.  My son Dylan was ahead of me the first mile, and I just wanted to stay within range of him.  We hit the first mile clock at 6:40.  Ok, I though, I can do this.

The second mile was more challenging.  I slowed a bit, and my son did as well.  There were plenty of cheering folks on the sides of the streets, which was nice.  I caught up to Dylan right about mile 2.  We were still sub 7 minute pace at that point.  6:56 to be exact.  We ran side by side for the next 1/2 mile as we passed a singing choir on the lawn of a church.  Now, that was unexpected!  At mile 2.5 we were at 7:05 pace, and I told my son that if he wanted to reach his goal of under 21 minutes, that he had to hightail it to the finish.  He just didn’t have it in him, and started fading.  I passed him, thinking that he would whoop my ass at the finish, but it wasn’t to be.  I finished in 22:18, he rolled in just seconds later at 22:29.  We both had a really good race.  I have no idea yet how many people ran the race, or how many were in our age groups, but I finished 13th in AG, 86th Overall.  My son finished 14th in AG, and 94th Overall.

It was a very inspiring day!  Inspiring to see all the Pink!  Inspiring to see all of the survivors, and families of those that have been lost to breast cancer.  In addition to the competitive event that we took part in, there was also a women’s only race that followed ours.  After that race, there was also a recreational 5k (untied).  There were thousands of people there today.  Such a great event in support of a great cause. 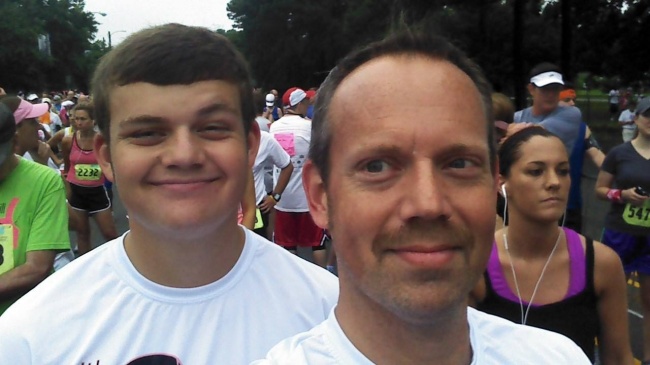 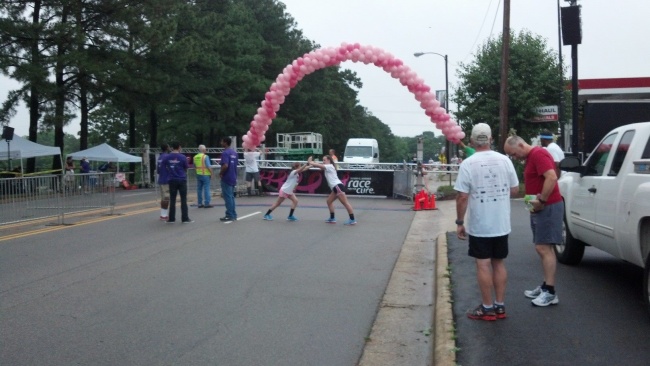 Tomorrow will be my first time running this 5k.  I have been more geared toward endurance running, so this will be interesting.  I haven’t competed in a 5k in over a year, so I am just going to do the best I can.  I am racing as part of Team RunRaleigh Racing, and I am lucky enough to be racing tomorrow with my 17 year old son Dylan.  I am sure he will step out in front of me at the line, and I will be chasing him down the whole race.  Actually, I am just hoping that I can keep him in my sights, as he will be my inspiration to move my feet faster.  As Tropical Storm Andrea approaches from the south, this may be the first race I may have to run in the rain.  I have been lucky so far.  I have been getting a lot of great advice, as I have been a bit concerned about my speed.  My goal for tomorrow?  Enjoy another race with my son, and be inspired by all the women and men wearing pink in support of breast cancer awareness.  Hopefully I will inspire, as well. 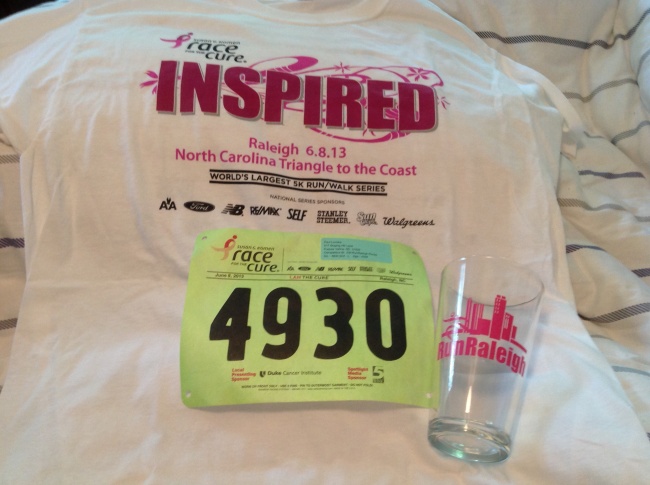